Weapon of the Guild


You need to have a total of 15 weapons displayed in any combination, but you have to have at least one of each type for full points. The process of getting them isn't as bad as you might think, particularly if you take your time. It's just a matter of knowing where to look, so follow along after the jump and we'll go through them!

Oppressor's weapons If you've completed the War in Kryta arc, Oppressor's weapons are going to be a snap to get in comparison to the others. The Medals accumulate pretty quickly as you progress through WiK, so you've probably got a few hanging around anyway. You can gain more pretty quickly by checking the Wanted by the Shining Blade bounty inside Lion's Arch Keep every day. Those bounties award War Supplies , which can be exchanged for more Medals.


So make sure you hang on to your War Supplies and Confessor's Orders to get more medals. This is all well and good, but what if you've not finished War in Kryta, or even started? I know it looks like a huge undertaking, and I beg you not to start by looking at the flowchart. Don't get me wrong; it's a fantastic piece of work and a good reference if you need to check your progress after you've started. I referred to it more than once when I was getting my characters through and couldn't figure out what was halting my progress.

Unfortunately, when you are trying to get started in the first place, it's horribly daunting. My suggestion is that you go to the step-by-step walkthrough that is written in list form. Confessor's Orders, War Supplies, and Medals of Honor will roll in, along with a fair amount of gold and other goodies.

Finally, while you've got the War in Kryta arc active, don't forget to watch for Courier Falken any time you leave an outpost in Kryta. He'll spawn and immediately start Leeroying for the nearest town.

Mantle will spawn and try to kill him, but if you can get him safely to the next town he'll reward you with some War Supplies. Don't forget to watch for his hilarious skill, Falken Punch.

As with several other areas of the Hall of Monuments, it's all about making sure you've got the foundation. I recommend that everyone go through the War in Kryta arc at least once anyway, since it's a huge part of what's linking us to Guild Wars 2. When you finish, you'll find yourself with a nice stash of Medals of Honor and the ability to accumulate more fairly quickly. Destroyer weapons Destroyer weapons caused what I see as one of the most interesting changes in the player market this week.

Diamonds and Onyx Gemstones are required to make them, and just last week the things were considered extremely common. The players in my guild and alliance -- and I assume in most others -- expressed irritation and received sympathy when one of those items dropped from a dungeon end chest. The market has since been turned on its ear. Destroyer weapons are the only HoM weapons that can be crafted simply by purchasing the materials and running to a crafter. In theory, you can get almost all of your Monument to Valor points with one fairly expensive visit to the materials and rare materials traders.

There are five separate segments on the principles of fighting that help unify these concepts across the various weapons. In addition to these multiple weapon classes, we also offer specialized classes that focus on one weapon, these include the individual weapons listed above, but also incorporate rapier and sword and buckler. In all instances, we treat these weapon forms as combatives - that is to say that we appreciate the martial capabilities of the weapons we train with and keep that in mind as the end goal of our study.

Though we do participate in tournaments, we intentionally avoid training for tournament fighting and instead look to use the tournaments as a test of our martial capabilities. Anthony began practicing HEMA in His primary focus is currently in longsword. At least, that's the observation I made. Creator of Kingdoms of Heaven. The ingame design of Weapon upgrades was Worth it. Originally Posted by The-Monetary.

I never fully understood the purpose of "upgrading" weapons to a "better" version of the one they already have. Sure, swords and the like evolved throughout the middle ages and beyond, but that was mostly for tactical reasons. Wouldn't a Swordsmith's guild maybe give some kind of discount on training sword-using units? Basically, they're capable of churning out far more swords for the army than a lower-level industrial base.

Or, perhaps it could just be called the swordsman school, drill hall or training ground? Don't run, you'll only die tired. Originally Posted by Velico. Since it gives experience the building could be renamed something along the lines of: "Advanced Drills", "Drill-Masters", "War Field", etc. I particularly like the idea of "Drill-Masters". 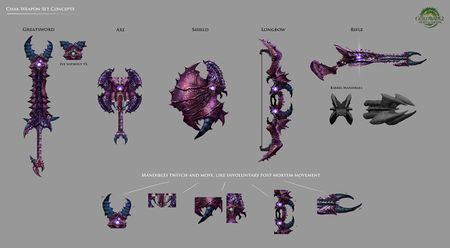 The script asking if you'd like to implement it could read something like: "Would you like to post a drill-master to this castle for extra training of the units stationed here? Patrician Citizen. Dear kritik Stephan, Maybe "Training ground" would best fit to such guild?

Where is syria getting its weapons guild

May Kong bless you, Brother Cedric Thank you CC and cedric37, Now I know what to change, at least in theorie. Training Ground sounds fine especially as it represents the ruler to invest in his troops rather than just levying them. Nevertheless it is to mourn, that the tiny sword icons still remain left out!